Spring declares its arrival at Greenwood Gardens before we open to the public with clouds of blowsy blooms on our beloved star and tulip magnolias, an event quickly followed by masses of the captivating, lightly fragrant cherry blossoms on our collection of Japanese cherry trees. Later in the season, North American native black cherry trees, Prunus serotina, can be seen flowering in the naturalized areas of the garden and South Mountain Reservation. While black cherry fruits are a valuable food source for wildlife, this native species has not been adopted for cultivated landscapes. It is the early flowering Japanese varieties that have captivated the world.

Native to Japan, the cherry tree blossom, sakura, is the country’s national flower and a cherished symbol of its history, culture, and identity. The 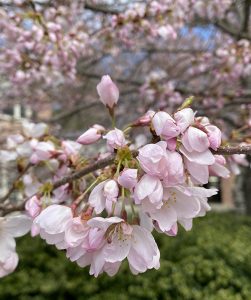 ephemeral flowers are a primary motif in the Japanese worship of nature and their short but glorious season—the petals remain on the trees for one or two weeks at most—reflects the Buddhist ideal to thrive in the present moment. Sakura exemplifies the Japanese philosophy of mono no aware, “the poignancy of things.” For centuries, it has been the custom to gather every spring at parks, shrines, and temples throughout the country for hanami, “flower watching” picnics, beneath the cherry trees. School children, families, office workers – virtually everyone in the country – joyfully celebrates the season of hope, renewal, and the transient nature of life that the luminous flowers represent.

Even so, reverence for sakura alone could not guarantee the survival of Japan’s native cherry trees during the country’s early twentieth century drive toward industrialization and political dogmas during WW II. ‘Cherry’ Ingram: The Englishman Who Saved Japan’s Blossoms by Naoko Abe, is a beautifully written, scholarly overview of cherry trees and the account of how a passionate English plant collector worked with Japanese experts to secure the future of the species and valued cultivars in their native land.

Ornamental cherry trees have become one of the world’s favorite trees and can be found flourishing in botanical gardens, along city streets, and on front lawns around the globe. ‘Kanzan’, a double flowering hybrid sporting massive blossoms packed with as many as twenty-eight petals, and other similar double cherries, have become a familiar site along town and city streets throughout the United States and other countries. But the most treasured blossoms in Japan are the simpler, more delicate, five-petaled Yoshino, Prunus x yedoensis, with soft pink buds that turn white as they open. 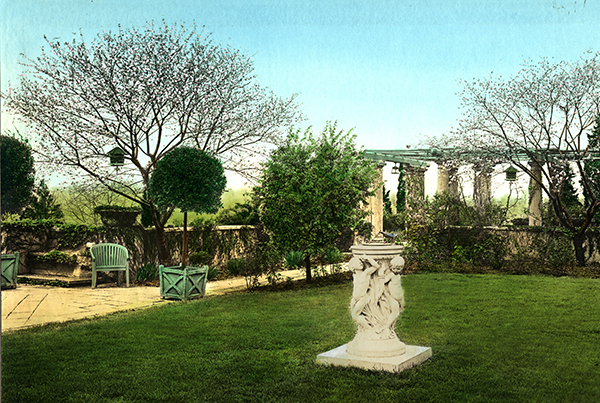 Archival photos reveal that during the Pleasant Days era, 1907 – 1944, white-flowered Japanese cherry trees grew at the edges of what is now  Greenwood Gardens’ Main Lawn. Today, Greenwood’s cherries, the semi-double cultivar, Prunus x yedoensis ‘Akebono’, grow on and just below the East Terrace of the Main House. Three new, large specimens were planted on the Reflecting Pool Terrace and near the Summerhouse during the Phase II Renovation Project of 2019-2020.

Washington D.C. may be the most famous American cherry blossom festival, but closer to home, Essex County’s Branch Brook Park is noted for having the largest collection, with more than five thousand trees and eighteen varieties.

Ancient and modern haiku celebrate the mono no aware of sakura (click on any photo to view it larger):

how can I forget
first pink blossoms under
the toddler’s first steps
Angelee Deodhar, Chandigarh, India