Greenwood Gardens’ mission is to connect people with nature in a historic garden oasis.

Our vision is a world that embraces the beauty and transformative power of nature, and celebrates the history of place.

A Brief History of Greenwood Gardens

Two very different American families have left their marks on Greenwood Gardens. In the early decades of the last century, self-made multi-millionaire Joseph P. Day established the gardens as a private pleasure garden, a place of retreat from the hectic pace and sizzling heat of the big city. Here his family cultivated lush annuals and perennials and commissioned pergolas, terraces, a summer house and tea house constructed of rough local stone and decorated with colorful Arts & Craft tiles.

The architect William Whetten Renwick laid out the garden according to strict axes and vistas bound by walls and pavilions made of rough local stone embellished with colorful Rookwood tiles.

After the Days sold the property and following some years of decline, Peter P. Blanchard Jr., an introspective gentleman farmer, and his wife Adelaide Childs Frick, purchased the property and created an evergreen formality to the garden.

In 2000, following his father’s wishes, Peter P. Blanchard III and his wife Sofia began the process of establishing Greenwood Gardens as a nonprofit conservation organization with guidance from the Garden Conservancy, a national organization based in Cold Spring, New York. Greenwood Gardens is now one of 16 exceptional gardens in the country endorsed by the Garden Conservancy.

Graced with the original cascades, grottos, Tea House and Summer House, it took more than a decade and the completion of the first of a three-phase preservation program to restore vitality to the historic grounds.

The last part of the current phase of preservation work has been the restoration of the forecourt, the original entry area to the Gardens. We have reconstructed the circular drive and moved two enormous native holly trees to a center bed. We have laid down rough stones to edge the adjacent hilltop and repaired curved retaining walls to the east and the west.

The towering, hand-wrought iron-grill gate greeting visitors as they emerge from the parking area was recently restored by Greenwood Gardens after suffering years of exposure and neglect. Extensive conservation work has mended the broken and rusted birds of paradise, parakeets, vines and ferns conjured in the early part of the last century by one of America’s great master craftsmen, Samuel Yellin, who has been described as the `Tiffany of metalwork.’

Greenwood Gardens maintains a number of outdoor sculptures and ornaments. The stone Tea House is framed by ceremonial hand-washing basins of granite and whimsical oversized chess pieces. Granite lanterns adorn the walls of the cascade terrace, a bronze sculpture of a boy holding two geese by the sculptor Emilio Angela (1889-1970) has been reinstated in the center of the Garden of the Gods and latticework panels have returned to the Cottages. 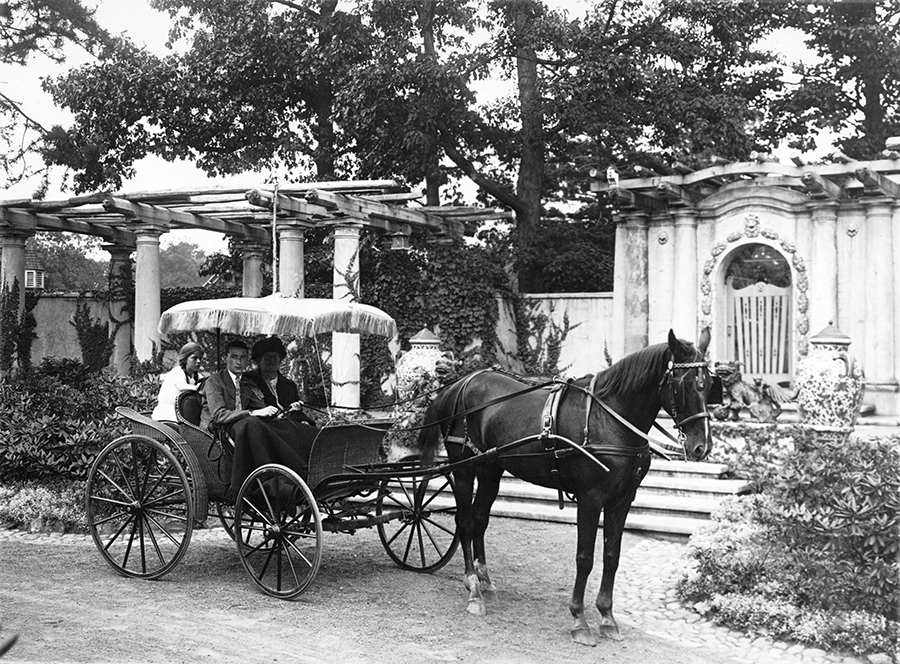 A Day family carriage ride through the gardens c. 1920s. 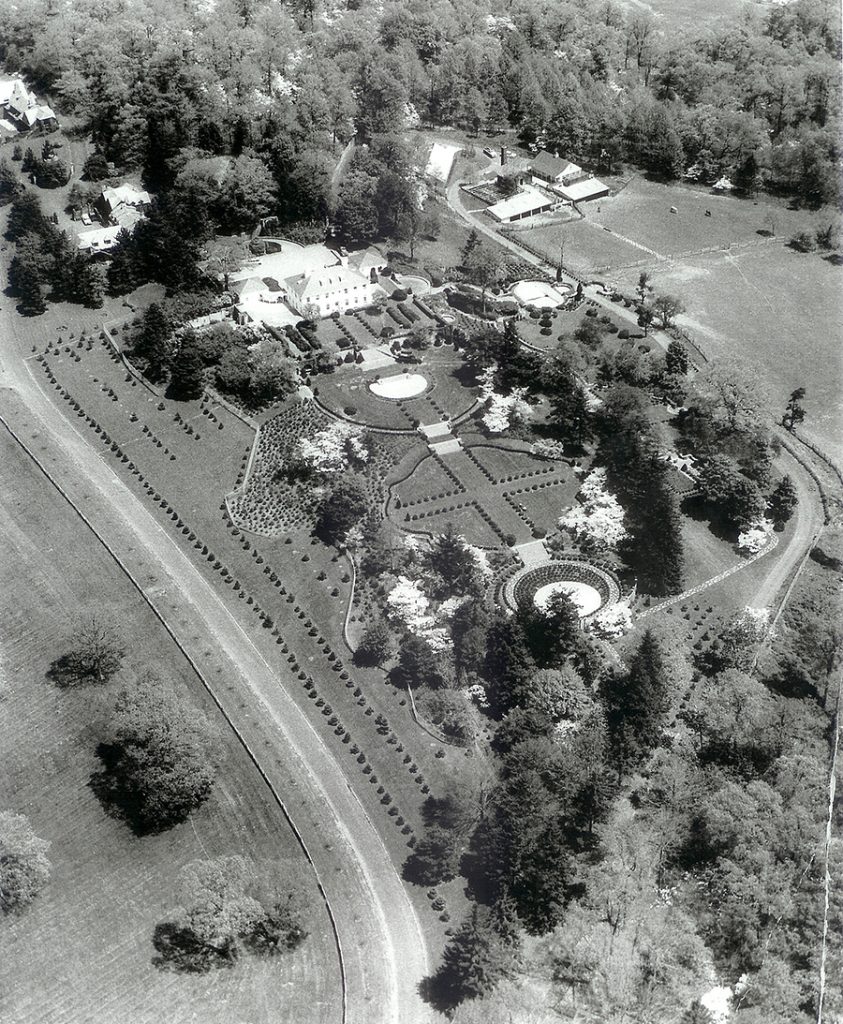 Aerial view of the Blanchard home and gardens c. 1950s.

Greenwood: A Path to Nature and the Past

Greenwood Gardens’ founder, Peter P. Blanchard III, has written a delightful history of an extraordinary place of natural beauty, including the stories of the Day and Blanchard families who shaped the Greenwood we enjoy today. Peter grew up as an only child at Greenwood, then called The Greenwoods. Filled with vintage and contemporary photographs, the book provides an overview of the Gardens, their history, and mission. In addition, Mr. Blanchard has included a delightful collection of personal anecdotes from his life growing up at Greenwood.

Peter P. Blanchard III is the author of three long-range land conservation studies published by the Trust for Public Land and New York City Audubon: Buffer the Bay Revisited (a review of unprotected open space fringing Jamaica Bay, 1992), The Century Plan (presenting 100 conservation sites on Barnegat Bay (1994) and An Islanded Nature, (a study of remaining natural areas in Western Staten Island (2001). Peter is also the author of We Were an Island; the Maine Life of Art and Nan Kellam (University Press of New England, 2010).

A portion of the proceeds from the sales of Greenwood: A Path to Nature and the Past will support Greenwood Gardens. The book is available for sale at the Garden for $20. 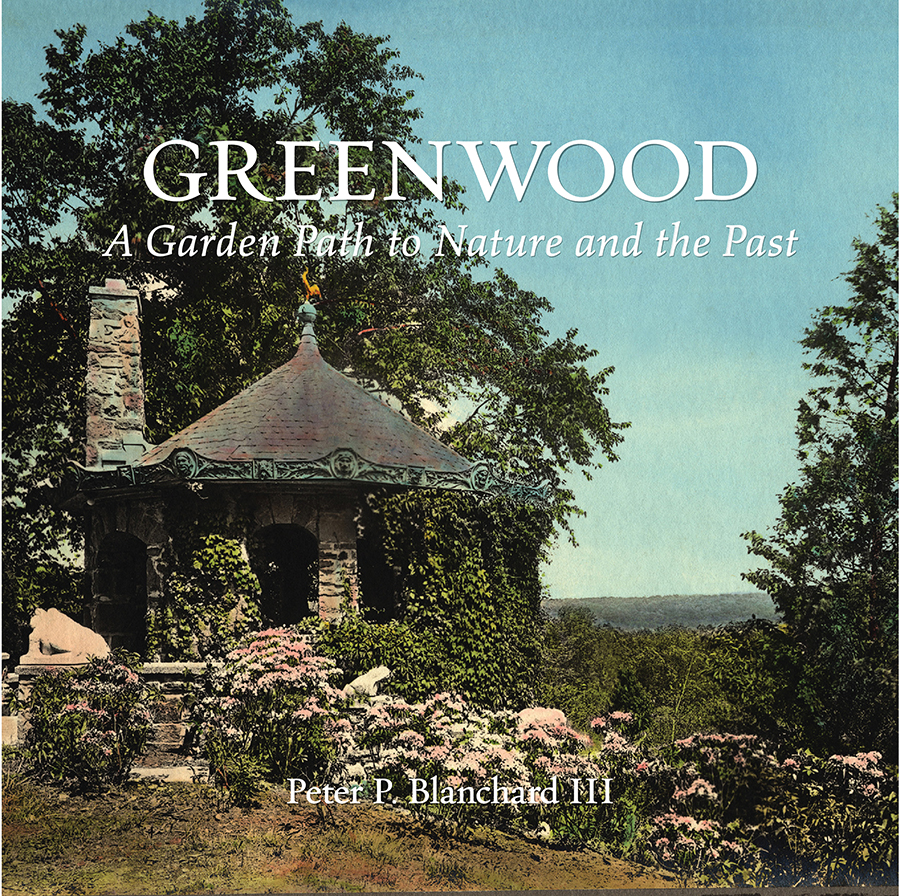 Use #howgreenwasourgarden for a chance to be featured

Directions
By car / By NJ Transit