Notes from the Garden: Talking Turkeys at Greenwood
Home

In the Garden: Talking Turkeys at Greenwood

Both the Day and Blanchard families celebrated farming on a small scale and avian life has long enlivened the landscape at Greenwood Gardens. Ever since the arrival of our new turkey flock this spring, the colorful birds have become a magnet for garden visitors. Relatively sleek in appearance when humans are not present our gobblers (male turkeys) will fan their tails and drag their wings in a display of courtship while they stride across the field to perform once they become aware of visitors at the barnyard fence!

“Having spent time with our current flock on their side of the fence,” writes Greenwood co-founder Peter P. Blanchard III, (speaking with visitors in photo below) “I believe that the gobblers’ behavior around humans is less of an aggressive posture than pure showmanship. The birds seem curious about the visitors’ presence and reactions. Having encountered a particularly feisty rooster, I find that turkeys are peaceful around humans.”

Our adopted adult turkeys – a magnificent cinnamon-colored Bourbon Red gobbler and hen along with two silver, black, and white Narragansett males and hens – did not start life in the same flock, so once they were brought together, a pecking order was quickly established. The two Narragansett brothers worked as a team and following several minutes of charging and scuffling, they achieved dominance in the flock and peace has reigned ever since. 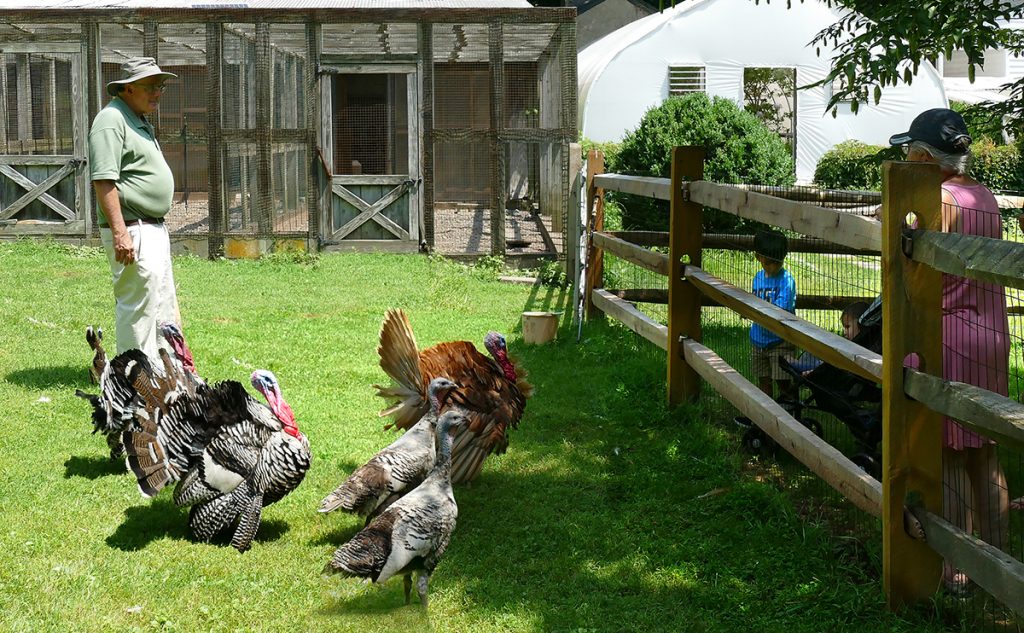