When William Whetten Renwick designed and built the Summerhouse for the Pleasant Day estate in the 1920s, four horse chestnut trees, Aesculus 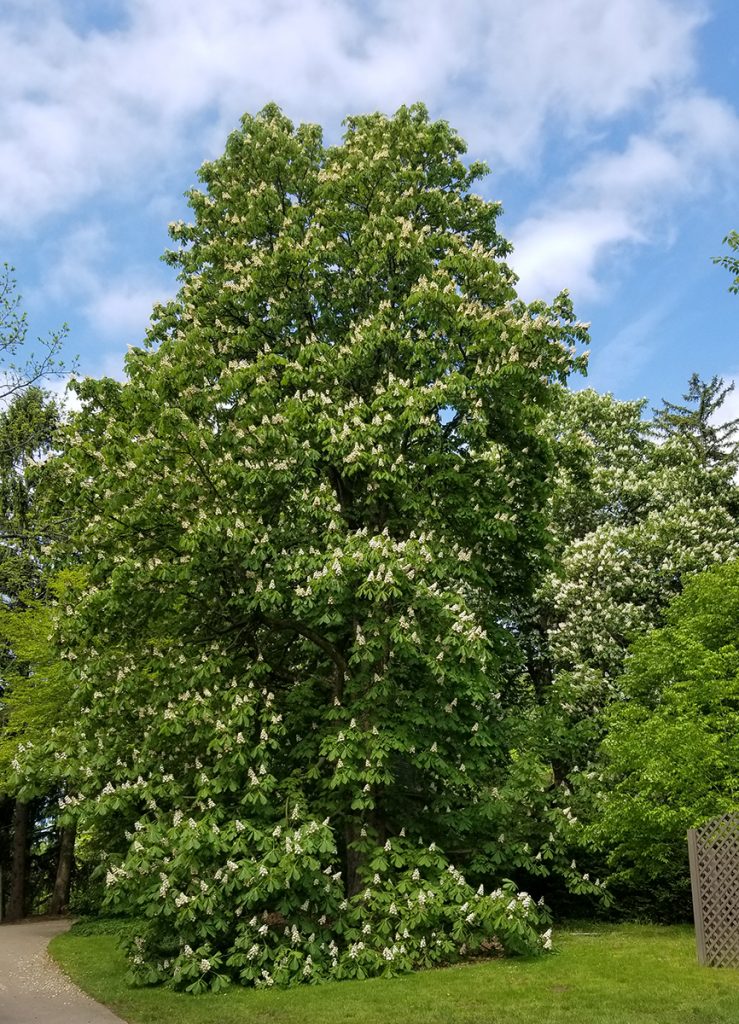 hippocastanum, were planted around it to provide shade during the hottest days of summer. The magnificent trees have graced the grounds that would become Greenwood Gardens for nearly a century and within the next few days, the buds on their panicles, commonly referred to as “candles”, will flower, turning the trees into resplendent “candelabras.”

Their handsome form—especially when in flower—and the deep shade they provide have led to their widespread use along streets and in parks and gardens throughout temperate climates. Horse chestnuts tolerate city life extremes very well and feature prominently not only in the United States but also define the boulevards of Paris and the beer gardens of Bavaria. Of the four chestnuts shading the Summerhouse, two are the species featuring clusters of single white flowers with yellow centers that will gradually change to amber then crimson. Botanists theorize that the yellow is a “nectar signal” guiding pollinators to the youngest, nectar-rich blossoms and once the flowers have been pollinated, the flowers change color. Consequently, while the buds continue to open, panicles will have flowers with both yellow and red centers. The other two trees are the cultivar, ‘Baumannii,’ which produce sterile, double flowers with red freckles that do not develop nuts. Chestnuts are hardy trees but susceptible to a fungal disease known as leaf blotch. Professional arborists can help control the problem.

Horse chestnuts have developed formidable defense mechanisms to protect nuts or seeds known colloquially as “conkers” from being eaten by wildlife and humans and thereby insure progeny. The large, shiny brown conkers develop within a spiny coat that splits open as the seeds ripen. Although eaten by various animals, the conkers contain alkaloid saponins and glucosides that are toxic to humans, dogs, and, ironically, horses. Horse chestnut conkers are not the edible “chestnuts roasted over an open fire” during the holidays or ground into a paste for deserts. Edible chestnuts come from the unrelated American, European, Japanese, and Chinese species.

Native to Southeast Europe and the forests of the Balkan Peninsula, horse chestnuts and the buckeye family to which they belong have a long association with mankind. From time immemorial, members of the buckeye family, Sapindaceae, have been recognized for both medicinal and symbolic values. The Greek name Aesculus refers to Aesculapius, the Roman god of medicine and healing and hippocastanum refers to early use of horse chestnut extract as a treatment for winded or coughing horses. The name also refers to the resemblance of the nuts to that of the unrelated American chestnut, Castanea dentata. 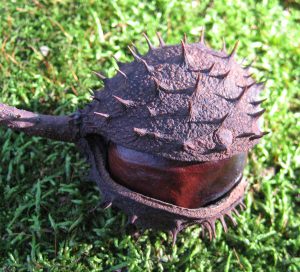 Conkers have long been associated with magical or curative powers. If kept in one’s pocket, two conkers were said to prevent hemorrhoids and rheumatism and three shiny conkers meant money was forthcoming. Over the centuries in Britain and Ireland, they have given rise to a children’s game. When suspended by a string through a hole drilled in the middle, the round brown nuts are used in playful conker versus conker combat. Two players take turns striking at the conker of his opponent—but not directly at that opponent—with his or her conker. The game continues until the losing conker is smashed.

Horse chestnut flowers are the emblem for the City of Kiev, capital of Ukraine. And one specific tree holds historic and symbolic importance in Holland. As described in her diary written during the Nazi occupation, Anne Frank regularly observed a venerable horse chestnut growing in front of her Amsterdam home. One of the oldest horse chestnuts in the city, this tree survived until blown over in an August 2010 storm. Seeds from the beloved tree were collected and sown, giving rise to progeny which have been widely disseminated. Among the eleven Anne Frank Trees sent to the United States one was planted at the United Nations and a second at the 9/11 Memorial in New York City.

Double flowers adorn the panicles of the cultivar ‘Baumannii’.

Spiny husks split open when the seeds have ripened.

The spiked capsule can sometimes contain two seeds, or conkers.