Counting On Our Feathered Friends
Home

Counting On Our Feathered Friends 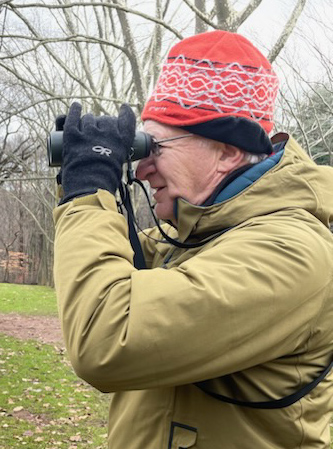 For the past two years, Greenwood Gardens has participated in the National Audubon Society’s Christmas Bird Count. Carl Woodward, a member of Greenwood’s Board of Trustees and an avid birder, has led the charge, collecting important data as part of a community science initiative to tally both the number and species of birds observed in a specific area in a single day. The count must take place between December 14 and January 5. The resulting data is submitted to the National Audubon Society and included in national tallies. This important data has been used by the Audubon Society in hundreds of analyses, peer-reviewed publications, and government reports.

Last year’s Christmas Bird Count took place on December 17, when 19 dedicated birders assembled at Greenwood for a one-mile trek through the garden, binoculars in hand. In addition to Greenwood’s own turkeys and chickens, a total of seven species and 15 total birds were observed. They included seven turkey vultures and two red-tailed hawks flying over, two blue jays, one American crow, one black-capped chickadee, one white-breasted nuthatch, and, seen at the last minute, one downy woodpecker at the far end of the North Ridge Parking Lot.

The birders were rewarded with cookies and hot chocolate to warm up after the Count!

In addition to the Christmas Bird Count, Greenwood offers Bird Walks throughout the season. Avian enthusiasts can immerse themselves in nature as they venture into the garden with a New Jersey Audubon naturalist. Birders learn about the varied species of birds that visit Greenwood’s peaceful woodlands and the surrounding 2,100 acres of South Mountain Reservation’s protected parkland. Our thanks go to Carl for his expert leadership and to all who participated.  We look forward to hosting it again this December.