Towards the end of summer, visitors arriving in the North Ridge Parking Lot are greeted with the light, jasmine-like scent drifting from the blossoms of the Heptacodium miconides (Seven-Son Flower). This deciduous shrub, or small tree, thrives in the partial sun near the Basalt Rock Outcrop and is notable in 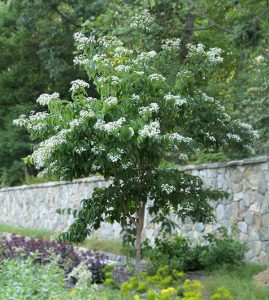 September for its cluster of small, creamy-white flowers.

First collected in 1907 by E.H. Wilson during a Chinese expedition, it lived in anonymity until his colleague, Alfred Rehder, named it in 1916. Hepticodum miconides was then forgotten until 1980 when another expedition to China resulted in viable seeds and cuttings that were distributed by the Arnold Arboretum and the U.S. National Arboretum. Since then, it has grown in popularity.

The glossy, green leaves emerge in May on this member of the Caprifoliaceae (Honeysuckle) family and maintain their beauty throughout the season. The small tree or shrub reaches 15 to 25 feet with a spread up to 12 feet and prefers full sun. The name Heptacodium refers to the flowers which grow in seven-branch clusters.

While the flowers make a beautiful display in late summer, the Hepticodium miconides continues to provide visual interest in the garden year-round. As an encore to its summer blooms, the calyces, which are a delicate pink color in late summer, turn a bright cherry red in the fall, once the flowers are spent. During the winter, the light brown bark exfoliates in strips, revealing a rich brown color below. Admiring the Hepticodium’s transition from summer to fall is a wonderful reason to plan multiple visits to Greenwood Gardens in the coming months.