History Beneath Our Feet
Home

History Beneath Our Feet

Fulper Pottery Company, originally named Samuel Hill Pottery, was founded in 1814 in Flemington, New Jersey and was acquired by Hill’s partner, Abraham Fulper, in 1860. With humble beginnings, manufacturing pottery drain pipes, storage crocks and jars, and other utilitarian ware, it was not 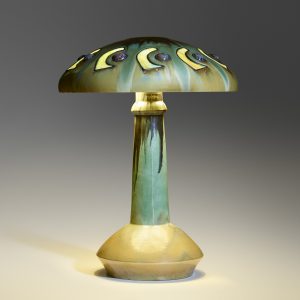 until the early 1900’s when William Hill Fulper II (1870-1953) began to experiment with the intensely saturated colored glazes that became a signature of the brand.

In the 1920’s, Fulper was one of the leading manufacturers of Art Deco ceramics including vases, bowls, and innovative Fulper lamps with pottery shades inset with colored glass. The company’s streamlined designs in its signature vibrant colors made its art pottery popular with collectors and consumers alike. Today Fulper art pottery is highly sought after at auction.

Greenwood is home to a collection of Fulper tiles in burnished shades of orange, green and blue. Look for them on the floors of the Summerhouse, Teahouse, and Tennis Pavilion, which were built in the 1920’s at the height of Fulper’s popularity. Set in a classic geometric pattern synonymous with the Arts and Crafts Movement, the tiles are incredibly durable, surviving the change of seasons in an outdoor setting for nearly 100 years. Surely, William Whetten Renwick, the renowned architect who designed these structures, selected the Fulper tiles because they matched perfectly with the Rookwood tiles found throughout the garden.

There was a resurgence of interest in Fulper tiles between 1984 and 2001 when four of William Fulper’s granddaughters began producing architectural tiles in classic Fulper glazes, many of which had not seen production since the 1920’s. The reproduction tiles were featured in prominent publications like Martha Stewart Living.